THE ROTHSCHILD,NAZI, AND PALESTINIAN CONNECTION 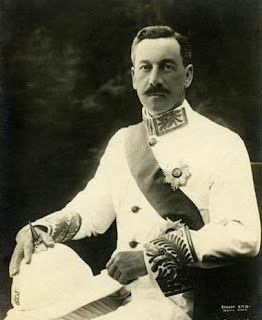 Samuel was the first Jew to govern the historic land of Israel in 2,000 years. He recognised Hebrew as one of the three official languages of the Mandate territory. He was appointed Knight Grand Cross of the Order of the British Empire (GBE) on 11 June 1920. The Order of the British Empire is part of the Sovereign Order of Malta network, and was created by George V (George Frederick Ernest Albert; 3 June 1865 – 20 January 1936).

Herbert Samuel was involved with the Rothschilds and the Rothschilds are Papal Knights of Malta, just like George V of England, the founder of the Order of the British Empire (Herbert Samuel was a Knight of the British Empire). "As a young man destined to serve in the navy, Prince George served for many years under the command of his uncle, Prince Alfred, Duke of Edinburgh, who was stationed in Malta." Source: Wikipedia.

Al-Husseini's appointment as mufti was itself the subject of much controversy. The decision to grant al-Husseini the position was made by Herbert Samuel, the first high commissioner of Palestine. It was odd that Samuel, a British Jew, would appoint a man who would be responsible for so much unrest within the Mandatory area. Al-Husseini in fact had been sentenced to ten years in prison by the British for inciting riots in 1920. None of that sentence was served, as al-Husseini had fled to Transjordan, and was soon after amnestied by Samuel himself.

Email ThisBlogThis!Share to TwitterShare to Facebook
Posted by Unknown at 3:29 PM