Pagan Idolatry in Mexico of Santa Muerte (The "Holy Death") 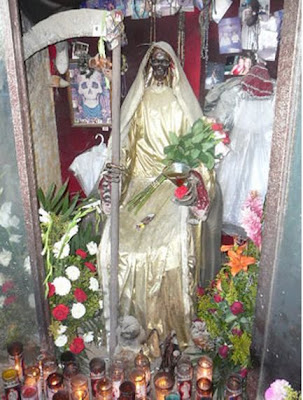 In Mexico, there is a demonic idol worshiped named Santa Muerte also known as Santisima Muerte. The name literally translates to "Holy Death" or "Saint Death."

The precise origins of the cult of Santa Muerte are a matter of debate, but it is most likely a syncretism between Mesoamerican and Catholic beliefs.
Source: Gray, Steven (2007-10-16). "Santa Muerte: The New God in Town" . Time.com (Chicago: Time). Retrieved 2009-10-07.

Mesoamerica had always maintained a certain reverence towards death, which manifested itself among the religious practices of ancient Mexico, including in the Aztec religion. Death became personified in Aztec and other cultures in the form of humans with half their flesh missing, symbolizing the duality of life and death. The Aztecs inherited from their ancestors the gods Mictlantecuhtli and Mictecacihuatl, the lord and lady of Mictlan, the realm of the dead, who died of natural causes. In order for the deceased to be accepted into Mictlan, offerings to the lord and lady were necessary. Many of the offerings given then are the same as those offered to Santa Muerte today.
Soure: Aracujo Peña, Sandra Alejandro; Barbosa Ramírez Marisela, Galván Falcón Susana, García Ortiz Aurea & Uribe Ordaz Carlos. "El culto a la Santa Muerte: un estudio descriptivo [The cult of Santa Muerte:A descriptive study]" 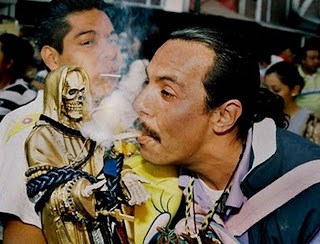 On the first of November the anniversary of the altar to Santa Muerte constructed by Enriqueta Romero is celebrated. The Santa Muerte of Tepito is dressed as a bride and wears hundreds of pieces of gold jewelry given by the faithful to show gratitude for favors received, or to ask for one.  The celebration officially begins at the stroke of midnight of November 1. About 5,000 faithful turn out to pray the rosary. For purification, instead of incense, there is the smoke of marijuana. While the cult is most firmly based in poor neighborhoods, Santa Muerte is not unknown in upper class areas such as Mexico City's Condesa and Coyoacán districts. However, the cult's negative image in the rest of society has an effect. 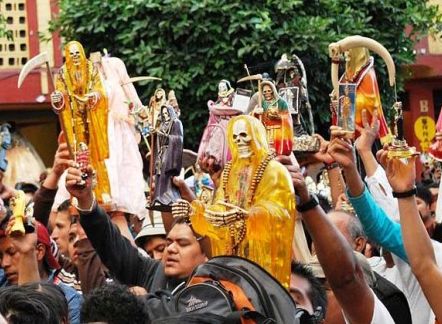 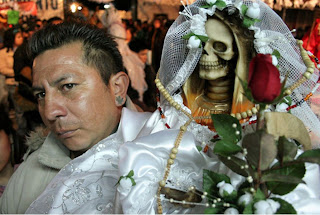 As of 2009, devotion to Santa Muerte has been on the rise in the United States for the past ten years or so, mostly following the millions of Mexicans who have immigrated to the country. Evidence of devotion to her can be seen anywhere there is a large Mexican community, such as New York City, Houston, Tucson and Los Angeles. There are fifteen officially registered religious groups dedicated to her in Los Angeles alone, which includes the Temple of Santa Muerte.
Source: Ramirez, Margaret. "'Saint Death' comes to Chicago". Chicago Tribune (Chicago). Retrieved 2009-10-07.