(Note: The Following is a Timeline exposing the Genocidal maniac, Amin Al Husseini.) 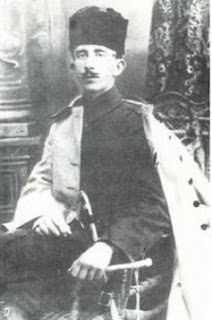 He is an officer stationed in Smyrna and participates first-hand in the Armenian genocide. One and a half million Christians are slaughtered under the sword of Islamic Jihad by the Ottoman Army.  Allegiance to Ottoman Empire and Islamic world take-over will be echoed by Osama Bin Laden in his post-September 11th declaration

Amin Al-Husseini returns to Palestine.  He brings with him lessons of genocide and the vision of leading a Pan-Islamic empire, where Jews and Christians are not acceptable.

1920/1921.  Riots. Amin Al-Husseini becomes lead figure in organizing riots against locals.  Amin Al-Husseini begins life-long campaign of inciting hate between Jews and Muslims under British Mandate of Palestine. He begins rule of terror over local Muslim leaders, who denounce him as an ignorant thug.

1921 Grand Mufti Against The Will of The People

The British, against the local Muslim vote, appoint Amin Al-Husseini as Grand Mufti of Jerusalem.  Amin Al-Husseini came in a poor fourth place in the vote. The Muslim community rejected his candidacy because he had not received any credible  Islamic education.  He was neither a Sheikh (religiously accredited leader) nor an Alim (Islamic scholar).   He becomes the pre-eminent Arab power in Palestine.  His brutality becomes notorious and is rejected by local Muslim leadership.

Amin Al-Husseini is appointed Head of Supreme Muslim Council (1922-1937). He is hugely disappointed by the end of the Ottoman Empire under Ataturk. Husseini becomes fanaticized by the idea that he must restore the lost Islamic Empire. He vows to fight all Muslim seculars.

Amin Al-Husseini implements restoration of Dome of the Rock and Al Aqsa Mosque in Jerusalem. He has the Dome gold-plated for the first time.  Thereafter, Jerusalem takes on more importance as Holy Muslim site in the eyes of the Arab World.

Muslim Brotherhood established in Egypt by Hassan El Banna in 1928.  Amin Al-Husseini becomes a central member and ideological inspiration for the Muslim Brotherhood. Mother organization for today’s Egyptian Islamic Jihad and Hamas. The Muslim Brotherhood preaches Wahhabi Islam, which justifies violent means to rid the ‘Muslim world’ of its non-Islamic element.  It envisions a Pan-Islamic Empire, where strict Islamic law rules over all.

Amin Al-Husseini starts to build his own political base.  He preaches Islamic unity and creates the World Islamic Congress in 1931.

Francois Genoud,  later known as the Swiss Banker of the Hitler’s Third Reich, travels to Palestine to meet Amin Al-Husseini for the first time.  Their relationship will continue well into the 1960’s.

Amin Al-Husseini is main organizer of riots. He organizes suicide squads against the local authorities.  Applies Nazi methodology of “systematic extermination” of any Arab suspected of less than total loyalty to Pan-Islamic vision of Muslim Brotherhood.

Any “non-Islamic” element is a threat to his Pan-Islamic vision.

Amin Al-Husseini arrives in Rome, where he meets fascist leader Benito Mussolini, the genocidal butcher of Ethiopians in Africa. Mussolini vows to help the Palestinian cause against the Jews. From Rome, Husseini declares Fatwa-Jihad gainst Britain. He preaches the notion of Pan-Islamism, with vision of Muslim unity to further his cause. 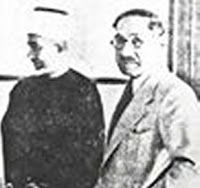 1941 "European Jews Must Not Make It To Palestine" -Amin Al Husseini In Berlin during WWII. 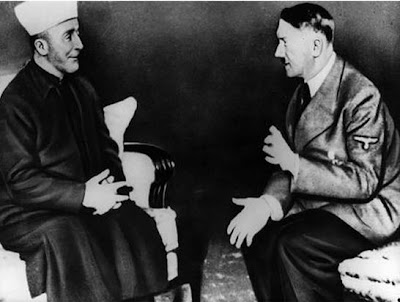 Amin Al-Husseini in Berlin meets with Adolf Hitler and is active in the decision to exterminate all Jews through the infamous Final Solution. Hitler was reportedly content with deporting the Jews out of Europe to Palestine.  Husseini perceived this as a threat to his stronghold in Palestine and pushed successfully for the extermination of the European Jews. 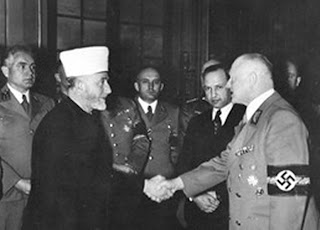 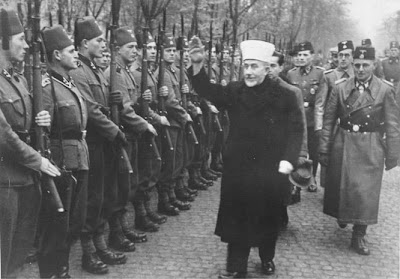 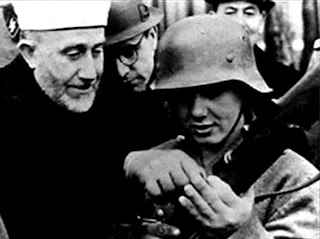 Amin Al Husseini creates the Hanzar Division of Nazi Muslim Soldiers in Bosnia, which he calls ‘the cream of Islam’.  It becomes the largest division of the Third Reich Army (26,000 men) and participates actively in the genocide of Serbian and Jewish populations. 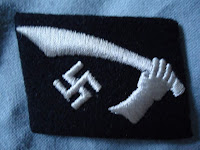 ‘Hanzar’ was the name given to the dagger worn by officers under the Turkish Ottoman Empire. Muslim soldiers pledge allegiance to Nazi regime in official statement prepared by Heinrich Himmler, head of SS Nazi troops. 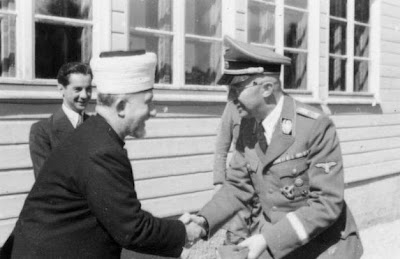 Amin Al-Husseini is made Prime Minister of Pan-Arab Government by Nazi regime.  His headquarters are in Berlin. He plans construction of concentration camp in Nablus (Palestine) to implement the  “final solution” in Palestine to exterminate the Jews there, as an extension of Hitler’s plan. Mufti becomes close friend of  Heinrich Himmler, Head of SS (Nazi Officers).  Amin Al-Husseini is given a private tour of Aushwitz death camp by Himmler, where he insists on seeing first-hand the murder of Europe’s Jews.

Nazi View  of Islamic Religion: Head of Nazi SS troops Heinrich Himmler stated to Chief of Nazi propaganda Josef Goebbels: "I have nothing against Islam because it educates the men in this division for me and promises them heaven if they fight and are killed in action.  A very practical and attractive religion for soldiers.”

Islamic Institute in Dresden, Germany Nazi Islam: Heinrich Himmler, Head of SS, and close colleague of Amin Al-Husseini, financed and established Islamic Institute (‘Islamische Zentralinstitut’) in Dresden under the Mufti.  The purpose was to create a generation of Islamic leaders that would continue to use Islam as a carrier for Nazi ideology into the 21st century.

March 1, 1944. Amin Al-Husseini makes speech from Berlin addressing Muslim SS Nazi troops: “Kill the Jews wherever you find them. This pleases God, History and Religion.  This saves your honor. God is with you.” 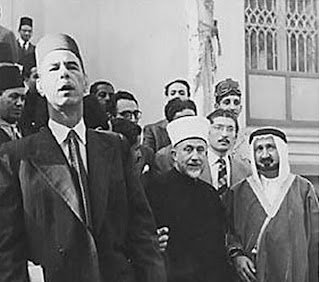 
Amin Al-Husseini is one of the founders of Arab League.  Goal is to reinforce Pan-Islamic unity.  Founding countries are: Egypt, Iraq, Jordan, Lebanon, Saudi Arabia, Syria and Yemen.  Husseini is appointed to President in Absentia of Fourth Higher Committee of Arab League.

Shockingly, the British give Amin Al-Husseini amnesty.  He returns to Palestine.

Amin Al-Husseini is appointed leader of Muslim Brotherhood in Jerusalem. Wahhabi Islam becomes the perfect vector for Husseini’s policy of ethnic cleansing.  He uses recently acquired Nazi methodology to implement his vision of an Arab World free of Jews (Juden-Rei in German).

1946 Wanted for Crimes Against Humanity

Yugoslavia requests extradition from Egypt of Amin Al-Husseini for War Crimes, and Crimes against Humanity. Egyptian government refuses to release him.

Amin Al-Husseini: “I declare a Holy War, My Muslim Brothers! Murder the Jews! Murder them all!”

Amin Al-Husseini: “I declare a Holy War, My Muslim Brothers! Murder the Jews! Murder them all!”

“We are not Afghanistan… We are the mighty people.  Were they able to replace our hero Hajj Amin Al-Husseini?… There were a number of attempts to get rid of Hajj Amin, when they considered him an ally of the Nazis. But even so, he lived in Cairo, and participated in the 1948 War and I was one of his troops.” 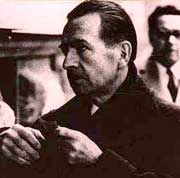 Ahmed Huber: Albert Freidrich Ahmed Huber (aka Ahmed Huber), born in 1927, is a Swiss journalist, who became a major financier of radical Islam and pan-arabism. 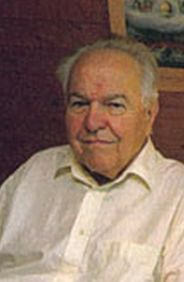 He is an avid admirer of Hitler and highly active in Europe's radical right elite.

After his involvement with the radical left Algerian rebels against the French in the 1950's, Huber converted to Islam through the offices of the Muslim Brotherhood.

At first he followed into the path of Pan-arabism with President Nasser of Egypt, whereby Nasser promised safe-haven for former SS officers in exchange for help on ‘Jewish affairs'. When President Sadat of Egypt made peace with Israel, Huber left and joined Ayatollah Khomeini.

He meets Amin Al Husseini, the Grand Mufti of Jerusalem, as well as Francois Genoud, Hitler's Swiss banker. While in Egypt, he also befriends Johannes Van Leers, former chief of Nazi propaganda under Hitler. He actively funds an anti-American and Anti-Israel agenda through his leadership of a secret fraternity called Avalon Gemeinschaft. This group unites former SS officers with younger radicals such as Horst Mahler, Jurgen Graf and Ahmad Rami.

Finally, Ahmed Huber establishes the Al Taqua Bank with Muslim Brotherhood members Youssef Nada and Ali Gholib Himati. The Bank was since shut down by authorities for transacting with groups such as Al Qeida and Hamas and financing terrorist acts.

Amin Al-Husseini becomes president of World Islamic Congress, which he founded. The Islamic Fundamentalists implement plan of making Arab lands Judenrei (free of Jews), as Hitler did in Europe. All Jewish communities of North Africa and Middle East are persecuted.

Hundreds of thousands of Arab Jews, whose presence in Arab countries predates Islam by a thousand years, are killed or forced to leave their homelands.

Continues to lead the Islamic World


In 1969, the (OIC) Organization of Islamic Conferences is founded and sets its headquarters in Jeddah, Saudi Arabia. It is an offshoot of the World Islamic Congress founded by Amin Al Husseini in 1926. The First Secretary General (1971-1973) is H.R.H. Tunku Abdul Rahman, Prime Minister of Malaysia. The OIC is made of 56 Islamic countries. It has been one of Islam's strongest political voices and has shaped the ideology of Pakistan and of the Muslim World until today.

1974
Amin Al-Husseini dies in Syria, leaving a legacy of terror, which continues to this day. 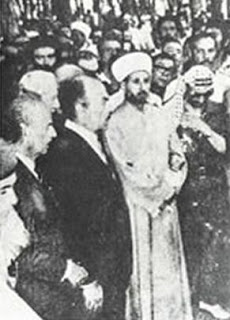 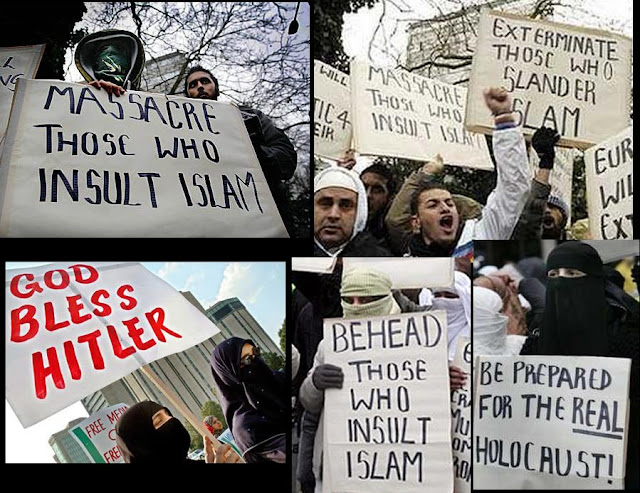